So our excellent weatherman (Hugh Brookes) said it would be a very similar day to yesterday, but colder. He also thought that East Anglia stood the best chance of offering the better weather. So obviously it was a Task B job since no-one in their right mind would inflict another day of 1-2kts thermals and a 200k task. Each day task groups and grid orders are swapped, so today The Challenge Cup was at the front and The Inter-Services at the back which meant we got to start earlier. Again by 12 noon the sky was looking quite flyable so the grid was launched on Task A Alpha(wot?!) most of us were through the gate like a rat out of a drain pipe as already the sky was filling in. I made good progress, but was soon into a large spredout area that I could have negotiated better and then it was a long long glide of nothing to go for but the turn point itself, once in sector I could see a glider turning in the near distance so pressed on and managed to connect with a thermal bubble that got me up and out of the weeds (apologise to Saltby for over-flying them on the low side) from here it was almost like a normal soaring day with strong climbs 3-4kts and 4k5 cloud base. On the way back from March (East Anglia), our eastern TP, there was a great convergence line / sea breeze front that looked to be going to my next TP if picking it up meant a bit of a northern detour, but what a romp this was (finally some fun) unfortunately, that is where it ended and we were faced with another cold and lack luster sky for the final glide in which sadly put me in a field 20k out (bugger). Even more buggering was that 494 completed but missed the final ‘control’ TP by about 100m due to computer screen problems. So a better day for me and 494 are overall 4th – go Dave & Rod. 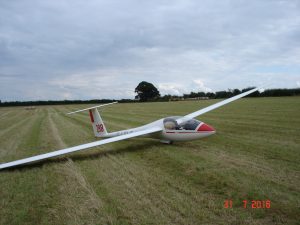 P.S. Thanks to Mike & Simon for the retrieve.