It’s difficult to go back a day as my memories not that good. Again the weather was not forecast to be very great the most notable thing being that if there was going to be any flying it would be a short weather window. The gossip was that probably just one task group would get launched, this suited me fine since we (TCC) were second grid wise today. But when the sniffer reported a 2.4Kts average climb and all the tugs started warming up I thought I’d better tape up and actually prepare my cockpit just in case. We were then told there would be a 10min pause between launching so they could re-consider their folly. Ten mins latter I was bouncing up an aerotow thinking this is actually quite unstable and why didn’t I water up?!? Next I was trying to decide my game plan, since the day was obviously going to stop at some point. I wanted to go as soon as the start gate opened but wasn’t quite at max start height so waited but 5 mins later decided I couldn’t hold any longer and thankfully was blessed with a strong climb soon after the start line. The rest of the flight was a bit of a blur as country side rushed by me, I do remember a large congress of gliders at the 1st TP under a big black cloud which made climbing up difficult however the lift was stronger at the back and had the added bonus of also being in sector :-> The 2nd leg was trickier but thanks to a climb with 494 2/3rds along I was able to keep going and connect with a line of energy that got me back home (finally). Very surprised to be 2nd on the day to be honest as I thought the bigger ships would have steamed round, however, the winner was also a Std Cirrus so maybe it was a day for little wings.

Today was a scrub day and a cinema visit and a bit of a bbq after the rain had stopped supplied by Helen with big thanks from me and the Myndies here. 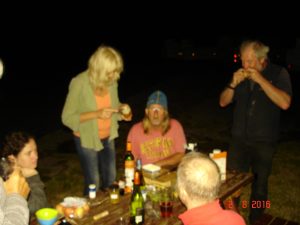 Not a very good picture