A beautiful day, finally, I mean a classic gliding day so we were not disappointed with a 360km variable barrel handicapped task. The Challenge Cup were at the front today and I was in the second wave of tugs so had to get a wiggle on which culminated in me forgetting to pick up my logger from control for a second time! Thankfully Lucy (of Shenington) raced down to get it for me, oh for crew!! So launching commenced at 11:30 and our start gate opened at 12:24, however cloud base was still a little on the low side although lift was a plentiful. I decided 13:00hrs would be a good start time but thought this a bit late for me since I’m a little glider and conditions were meant to blue up and freshen up wind wise, so brought it forward to 12:45. Then the start gate joker played its card and I lost my height and struggled to climb back up when approaching my time  🙁  Thankfully, once off down track I got my act together with some nice climbs, lost my way a little half way down leg 2 but picked it up again going into Cambridgeshire and met up with JF in a nice climb at TP2. At briefing someone asked is it wise to track straight through Mildenhall & Lakenheath as a couple of F15’s can really ruin your day, so it was with some surprise to spot one in the air, thankfully low down, when I was there – nice sight though. After TP3 the sky had a different look to it and then the CU started to disappear which made it harder work. Met up with JF again near TP4 on the way home then was chased in by 494 on the final glide 10k out, not a nice feeling. Hopefully I got them wet when I dumped my water – haha. 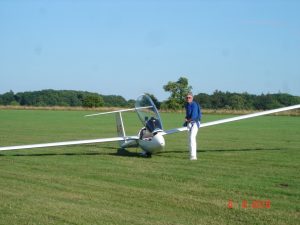 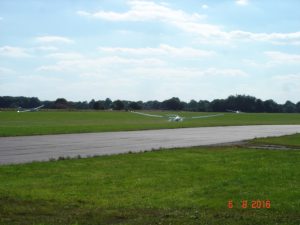