This is Dominic Haughton’s excellent account of his 500 km FAI triangle earlier this week, together with some photos:

The flight was a 500km FAI triangle MYN -TIA (Tintern Abbey) – (PEM) Pembroke  Dock – LLS (Llantysilio) – MYN); the trace is on the ladder http://www.bgaladder.co.uk/dscore.asp?FlightID=64408&RC=X .  Phil King flew what was probably the first declared 500k in Wales on the 31st March last year, a cat’s cradle up and down wind from Shobdon (Presteigne, Usk, Cerrig, Pontypool, Montgomery). If he is right, this flight is the first declared 500k FAI triangle around Welsh TPs.

The idea to fly large FAI triangles in Wales came out of a flight that included a 100k run up the coast without turning on the way from Lampeter to Snowdon using sea breeze fronts. Combining that with the ability to start early and end late by launching from, and flying over, high ground made a 500k in Wales look like a possibility. One big downside, and the flipside of the sea breeze bonus, is that the all three coasts can be lost to sea air. In particular the Vale of Clwyd and the Cheshire plain are often killed off quite early on, so getting far North at the end of the day is tricky, and Wales is only so big. You have to go far West to fit in a 500 FAI triangle and I did not know much about soaring in Pembrokeshire.

A bit of work with SeeYou over the winter of 2015/16 produced about half a dozen options for classic 500 tasks “by the book” (downwind, crosswind, upwind, downwind) with minor variations depending on the wind direction; I then just waited for RASP to predict the right day. In the meantime I had a flight to Camarthen to get a feel for the area. That involved soaring over the sea at Pembrey to get back east, as air from the North came across the peninsula and swept the good air into the Bristol Channel, proving the point that you need to be in Pembrokeshire early enough to get out. On that occasion I was saved by arriving back at the end of the Brecon Beacons and ridge soaring up to Pen-y-Fan before resuming normal service.

Last year’s attempt at a Welsh 500k triangle was on a similar day in April, but started later than planned. I turned Monmouth and Haverford West, again got pushed over the South coast on the way back to Swansea, before connecting with the N-S sea breeze front and heading North. In the end I abandoned the task north of the Mynd on the way to the last TP, for a total of about 460k, when the day looked like it had already ended in the Vale of Clwyd.

This time I planned to fly further south to shorten the distance north of the Mynd at the end of the day, and to launch early. I got the second launch of the day at 11:15, straight into a 7 knot climb to 4000ft cloudbase and then off on track. I got to Credenhill (near Hereford) without turning and made the first TP ( Tintern Abbey) in under an hour at 106kph. 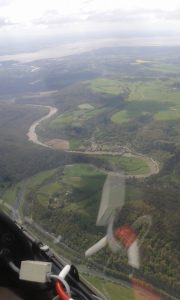 The aim was to be at the first TP at midday so all looked good until Pontypool, when everything north of the Brecon Beacons disappeared in massive showers. Then showers appeared on track and visibility turned poor, with snow (OK, a few flakes of snow) in the cockpit, and I thought about abandoning. Turning for home would have meant, at best, soaring the Beacons, possibly in a deluge, until the showers cleared, but the likelihood was that I’d have ended up on the ground somewhere near Brecon. There was plenty of lift around, I guessed I was at the edge of a convergence with the northerly wind air against sea air coming in from the south coast, so for want of a better plan I pushed on. 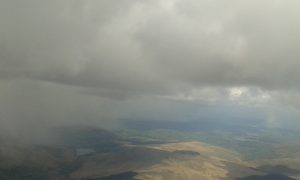 Big showers in the Brecons

Emerging from the gloom into a perfect soaring sky over Pembrokeshire was a (very!) welcome surprise and the run into the TP at Pembroke Dock turned out to be easy, with reliable climbs of 5 or 6 knots. I think Dale Bridge, which is even further West than Pembroke Dock, was on, but I’d set the task so turned PEM then also went round Haverford West just in case. 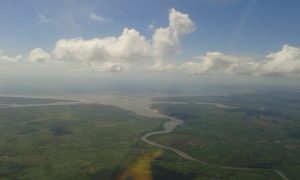 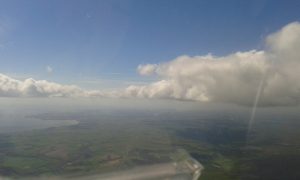 The direct route north clipped the coast at Aberystwyth, and the air initially looked good, but I diverted inland to avoid the Aberporth Danger area. That worked out well because there then seemed to be an incursion of sea air; the edge of the sea air front was working well, but a mass of showers appeared to the east and then ahead on track,  so I parked up at Llandiloes (east of Aberystwyth) to see what happened next.  After about 10 minutes the sky cleared and the run to the TP at Llantysilio looked very possible either via Welshpool and the flat lands, or the way I went, directly over the high ground past Vyrnwy. 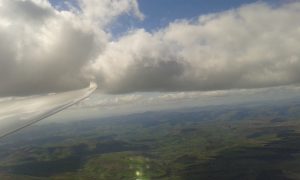 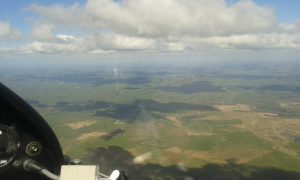 Llantysilio TP is under the 4500ft Class A airway so I was a bit cautious going in to it and diverted to a line of lift coming off the Berwyns about 20k from the TP. That lead into the TP and then a climb to 5000ft at Chirk got me well above glide with the tailwind, but I took a couple of top ups on the way back as there was still plenty of lift around. Back at the Mynd at 17:30 so the task was probably underset by about 50k; going via Dale Bridge to Prestatyn is an FAI triangle of over 580k so there is room in Wales to beat this!