An interesting day in many guises. For those committed and early up and away a great time was had in north Wales. See Paul Shuttleworth’s day pics at;

Yes that really is the wind farm off of Rhyl. Apparently there was an unrefusable cloud street, however, on turning around and poking back into wind landing on the beach was a distinct possibility. Sadly, on returning back to the shire they found their passage blocked by a wall of showers and dead air which also brought down Rob Hanks who also tried out the Clwydian ridge flanked by the gliding clubs Lleweni Parc and Llantysilio. Others; Mac, SAdlard, Dave Rance tried the south and again were met with showers, but strangely none actually made it to the Mynd although threated many a time. And I out climbed a K8 Harris! (will probably never happen again 🙂 ) A strange strange day. 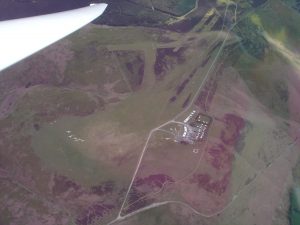 Can glider trailers really be that small?