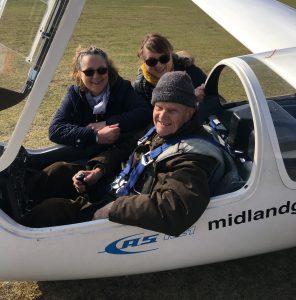 Recent member Owen Elias, seen here in the glider with daughters Sarah and Helen, chose us here at the Mynd to help him celebrate his 90th birthday. A virtual coach-load of family members were in attendance to watch him take to the skies. Owen made the mistake of telling me that he was sponsoring himself with a donation to the Alzheimer’s Society (an illness which claimed the life of his wife a couple of years ago) for every minute flown, with bonuses for aerobatics! So first up a couple of soaring flights, which he handled very well, then later an aerobatic sortie. Four loops and a couple of chandelles later (as his wallet begged for mercy!) he landed to applause and smiles all round. 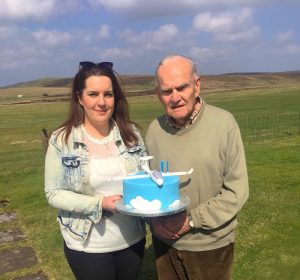 Here he is again, being presented with a cake by his grand-daughter Elizabeth. Not sure where the other 87 candles are – probably too much of a fire hazard! Just look at the weather they brought with them – please come again – anytime!

Happy Birthday Owen – and many Happy Returns, from all of his family and all at the Midland Gliding Club!

In other news … A good day had by all with 75 launches by the close. Some more annual checks completed, lots of training, a smattering of trial lessons and a visiting party from North Hill here for the week, kept all four two-seaters busy. A few private owners flew, notably Rob and Dave in the Arcus who braved the murky and fairly low cloudbase conditions to get out to Llyn Brenig in Welshest of North Wales, although it cost them a bit of petrol to get home – see the flight on the Club Ladder.