If you are planning your week then I would go for Wednesday . After midday today (Monday) it looks poor til Wednesday which looks very nice, then it depends on the amount of cloud about but my money is on Friday as the ridge should work.

This morning I am sitting in the clubhouse with the sun shinning waiting for the rain which should be here by lunchtime.

Let me know if you are coming Wednesday and I will try to find a second instructor if there are enough of you.

Another wave profile on Sunday, last Wednesday worked albeit late in the day with climbs to 7500′ AMSL.

Tomorrow has a similar profile and Rasp has a little more faith, so should we.

Hello everybody,
I didn’t get to post the blog yesterday because I, James, Eddie, John (O’R) and Roger (E) were at Shropshire BizFest, held at Shrewsbury Town FC, where we were demonstrating the art and science of gliding, with the aid of the BGA Simulator, to over 600 people from local businesses.  I was somewhat unconvinced when James suggested the idea to me but the sim was busy all day from 2pm to 8pm and we had a lot of serious conversations with people who are seriously interested in one of three things; adding a flight to their bucket list, giving a flight as a present or actually taking up membership.  I was surprised at how many of the people we spoke to are interested in joining, but maybe they represented the right demographic for us; generally young to middle aged, professional go-getters and with an adequate level of income.  Several expressed to me their surprise at how inexpensive membership of our club is compared to their gym or golf club subscriptions.  We will be following up contact with them next week and hopefully some at least will be visiting the club in the near future.  Let’s make them very welcome.  Thanks to everyone who helped out on the day, these events are important to our profile locally and help to generate much needed revenue.

Olympian 2020
Thanks to the three people who offered help during the Olympian next year.  Just another 20 to go!

Shrewsbury School Summer Gliding Camp
Now an annual fixture in the Shrewsbury School CCF calendar, the Summer Gliding Camp is of huge benefit to aspiring pilots in the School CCF RAF Section with six days of focused, individual training.  As June and the Summer Term were drawing to a close, a sustained period of high winds and significant rainfall threatened the success of the 2019 Gliding Camp, scheduled to take place from Sunday 28th June to Friday 5th June. However, the sun fortunately broke through just in time and, for the first time in five years, the cadets were able to fly all day and every day of the Camp.

Unfortunately, a combination of factors (including particularly poor weather on Thursdays throughout the year) meant that the Fifth Form were more rusty than usual at the very beginning of the camp. It therefore wasn’t quite possible to get anybody to the standard required for solo flight. However, having had a greater number of flights and minutes in the air during the camp than in past years, all made excellent progress and the School currently has more students than ever approaching that next step.  Morgan Matthews (Ch 3) joined the camp on a few days, having been flying privately at MGC since before joining Shrewsbury School. Having continued his training through the summer holiday, he has just earned his solo flying wings – and our congratulations!  Many thanks to all who helped out on the field to make the camp such a success and especially to Paul Fowler for his untiring work with our juniors.  (Thanks to Shrewsbury School web site from which much of this content was borrowed). 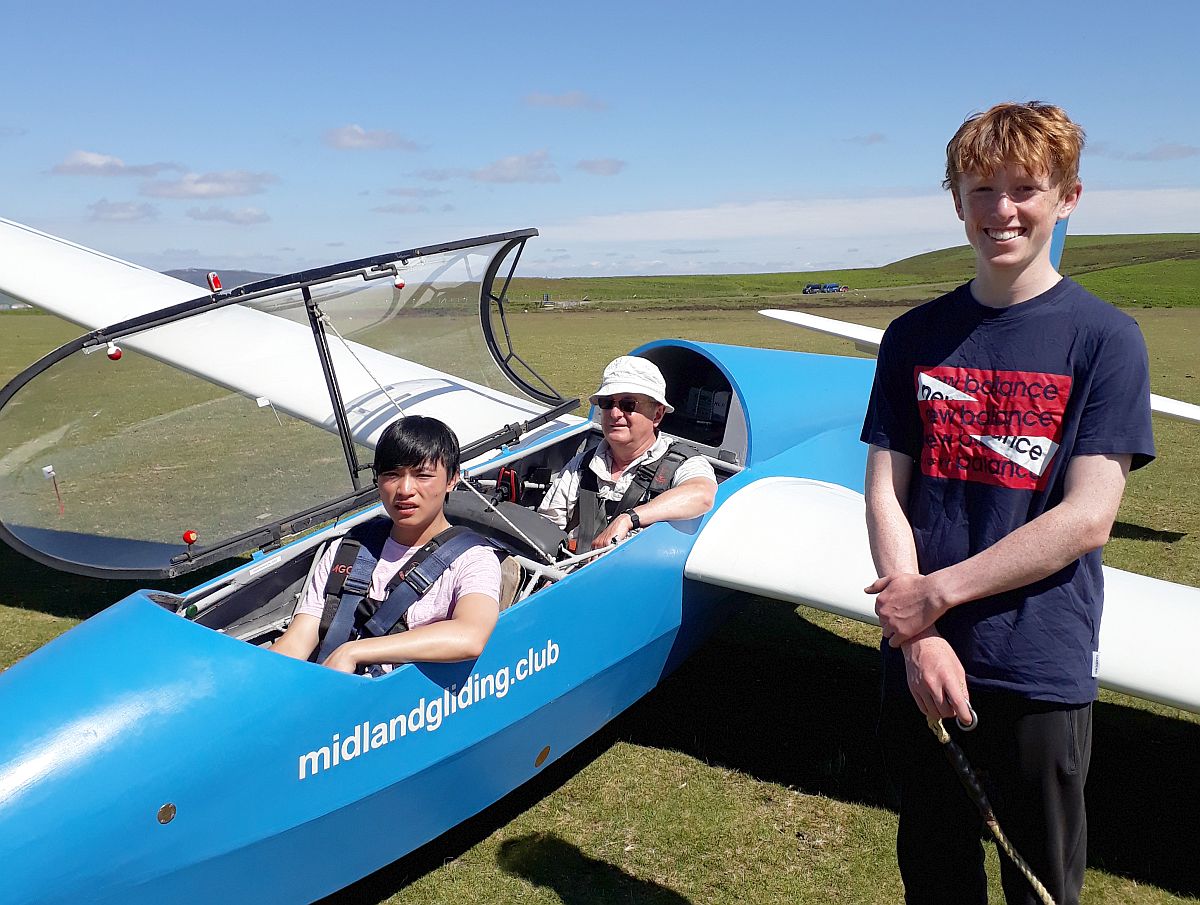 I am going to be out of the country for the next four weeks so I will not be posting on this blog for a while.  However I feel sure that other officers and committee members will be taking the opportunity to keep you informed while I am away.  The soaring season is nowhere near over as this week will suggest so make the most of it and pack in a few more hours before the winter.  Remember, currency and recency are paramount.

Keep your eye on Wednesday, if I were asked to draw a Tephi profile of a wave day the GFS tephi for Wednesdat afternoon is what it would look like.

Hello everyone
I have spent a lot of the last week doing stuff related to the two major events happening next year, namely the Vintage Glider Club National Rally and the Wenlock Olympian Games – Gliding.  For those that are not yet aware the VGC Rally, for any vintage or classic glider, will take place at the Mynd from 23rd of May to 30th May and the Olympian event, a proper competition with Olympian Gold, Silver and Bronze medals at stake, will take place from 13th to 17th of July.  One of the things that has become very clear is how many people it takes to organise and run such events.  Just looking at the Olympian we will require: Director, Deputy Director, Met person, Task Setter, Safety Officer, Duty Instructors, Launch Directors, Launch Point Marshalls, Winch Drivers, Tug Drivers, Bar Staff, Help in the Kitchen, plus help to clear and tidy the site, help to marshall visitors, organise evening events and guest appearances from people like the modellers etc etc etc.  So I will be looking for volunteers for both events but mainly for the Olympian.  If we get enough offers of help there is no need for anyone to do more than one or two days or even parts of days.  But I need lots of offers so that we can schedule times and days for all the roles and jobs.  There are many members who regularly and unselfishly help out doing all kinds aof thigs around the club but I am hoping that some of our new members will not bfeel shy about coming forward and helping out.  The planning has already started; John Randle is doing a lot of the on the ground organisation and I shall be Directing the Olympian.  If you can spare a few days or even a few hours for either event please let me know  as soon as possible so I can draw up a schedule and allocate jobs to names.  It is really important that we host events such as these to raise the the profile of the club which attracts new members, visitors and financial support from various grant giving bodies. 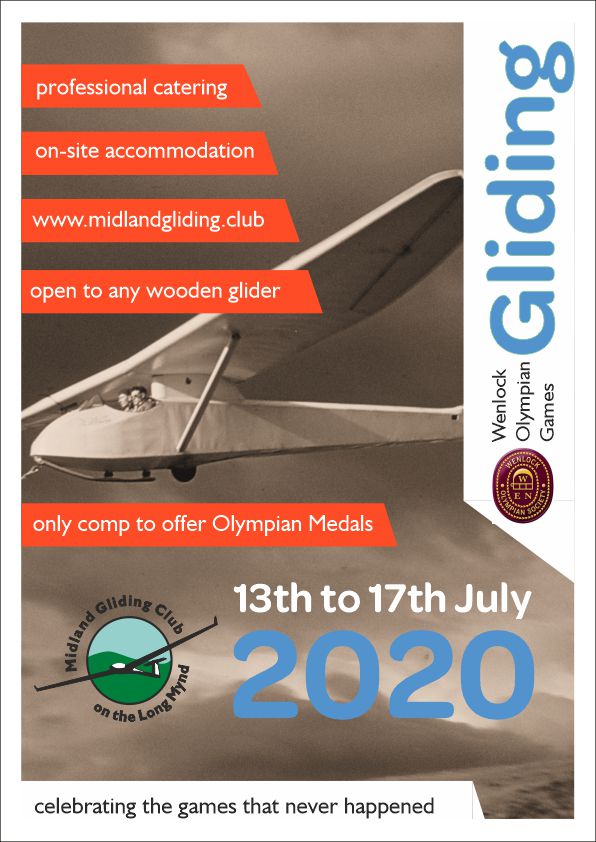 Next Week
Is course no 11 run by Dave Crowson. The last of the courses for this year starts on 23rd September run by Rob Hanks.   The courses have been very successful this year.  We have sold more course places and frankly made more revenue than for some time.  This is important to the club as we rely on revenue from the courses to help pay for our professional instructors and winch driver and to make it possible for us to offer seven day a week opening throughout the summer.  And of course we have limited weekday opening throughout the winter as well.  Both  are benefits that many other clubs across the country are unable to offer.