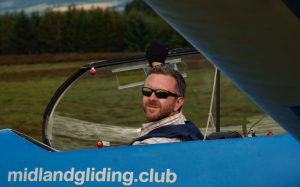 Yeee ha – good weather, 56 launches, plenty of enthusiastic members and a real buzz about the place. Thanks to Guy for winching and everyone who helped on the field to make it such an enjoyable day.

Rob, Darce, Julian and James all clocked up so 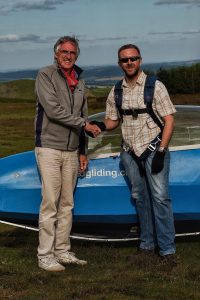 me XC kms (I’m sure they are on the ladder, even as I type – hint!); Jack and Jon continued pre-solo training; Alasdair sorted his annual; Coley and Mark W were out in FWM; Liz in HYD; Clive and Simon flew 18; Morgan converted to the K23 and Steve Whalley bagged his first (and second) solo.

Super day – we’ll have a few more like that!

Postscript … For the “Covid Police” out there … As you can see Steve wore gloves; I used hand sanitiser both before and after the handshake. Some traditions, I’m afraid, must endure. Mark