A better day than I expected at the Mynd. The wind stayed on the ridge most of the day (in spite of the forecast to turn north in the afternoon), and it was consistently thermic. We were launching to the north, and there were plenty of people out flying both club and private gliders. Nigel and Walter were the instructors, and did a number of trial lessons and check flights. There’s only one XC in the ladder at the moment – Allan Reynolds, MYN – WNE – CVN – LUD – SHW – MYN, 128 km. But it was a good XC day, and a fair number of paragliders left, their longest being around 60 km. 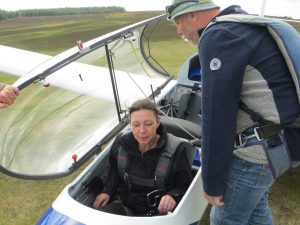 Nigel and Maria, on a First Flight.

Dave Wedlock getting excited on launch.

One Response to “Sunday flying”