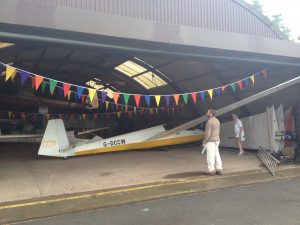 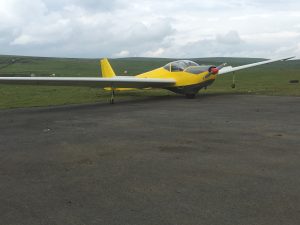 Yesterday was a real success! The morning saw a flurry of preparation, including Denise’s terrific clubhouse decoration, and a grand sweeping effort to make the hangar apron look presentable (here’s the motor glider enjoying the sparkly apron – it’s now so clean you could eat your dinner off it!).

The fog lifted around 11am for what we thought would be a short flying window, but which in fact turned out to last for the whole day! The weather was perfect – just nice enough to fly, but just poor enough so that members were happy to help on the ground 🙂

We welcomed a steady stream of previous members and new faces, and everybody had a chance to have 1, 2 or even 3 flights! It was great to see Alex Rowlands, Brian Connaughton, Jon Lewis, Jeanette Griffin, and William Brewis who re-joined the club after a couple of years away. We were also joined by a small but enthusiastic group from Wrekin College, and we look forward to welcoming them again next weekend.

Overall the day was a great success, resulting in 1 member joining, 2 booking onto courses, and 9 or 10 previous members & new faces who will be coming back in the next couple of weeks to take advantage of their newly-minted 3 month memberships, and who will hopefully go on to become full members in due course!

Thanks partly to the weather, we were not overwhelmed with people who ‘just wanted to try it’; instead, the people who came along were really interested in learning to fly, so it seems that the marketing angle worked effectively too.

HUGE THANKS go to Chris Harris, Nigel Lassiter and Denise Hughes, who did a terrific job of organising the day. The committee would also like to extend our heartfelt thanks to every single person who helped out on the day, whether instructing (Mike Greenwood, Walter Baumann, Steve Lewis, Denise, and Matthew Cook), running the airfield, winching, greeting our visitors, working in the kitchen or the office, and tidying up at the end.

We are already planning another one next year, but now that we have the infrastructure in place, we may consider running a similar day again this year too (if we can do it without encroaching on members’ flying!)

Here’s a video of a happy customer on their first landing.

One Response to “Past Members Reunion & Flying Taster Day – an all round success!”