Yesterday was a bit of a grid squat till 1300hrs when we scrubbed due to the excessive wind. So it was a day out on foot or car for ppl. Simon, Mike & I went off to see Shuttleworth (no not that one) the collection of old has been’s (okay well it could have been him) at Old Waldron near Bedford where we passed a couple of glider trailers on the road and had very much better skies. I also paid my respects to Henry Morris (died of a brain tumour aged 41) who’s ashes are scattered there. On returning to site following a disastrous decision by Darcy to take the direct route up the M1 we discovered upside down tents missing wing covers and so on. Jane / Steve Nash also had a very lucky escape as a ladder rose up out of the road and landed on the front of their car piercing the windscreen! 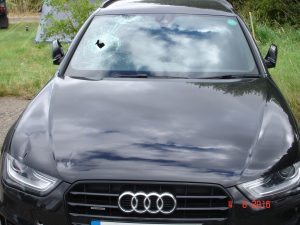